Two brothers who work at The Crosby Group’s Arlington, Texas, facility have thrown their support behind the company’s commitment to raise up to $25,000 for the Children of Fallen Patriots Foundation by donating a portion of every wire rope clip sale from April through June, 2019. The charity provides college scholarships and educational counseling to military children who have lost a parent in the line of duty.

Crosby, the largest lifting, rigging, and material handling hardware company in the world, boasts a US manufacturing footprint that includes plants in Texas, Oklahoma, and Arkansas. Its involvement with the country’s military stretches back to its earliest days, supplying shackles and other hardware for vehicles. Today, more than 50 veterans are employed at Crosby. 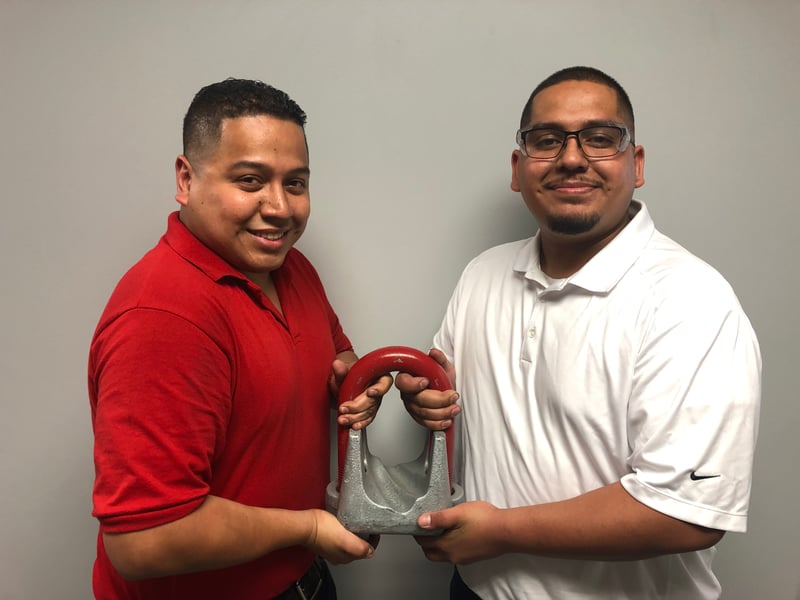 In Arlington, Texas, veteran brothers Aaron (left) and Erick Gomez prepare the wire rope clips, which range in size from 1/8” to 3 ½”, and other products for shipment. These end fittings are used in a variety of applications to clamp the loose end of a length of wire rope, once it has been looped back to form an eye. They can also be used to connect two pieces of rope together.

Aaron, 31, a supervisor at Crosby, was first to join the company having served as a truck driver for the US Army. He was based at Fort Hood, a military post located in Killeen, Texas, but toured Afghanistan for seven months from Bagram Airfield, the largest US military base in the country. Younger brother, Erick, 25, a coordinator at Crosby, was also based at Fort Hood and served as a weapons mechanic. He followed his older brother into the company having left the military at the same time, circa 2016. Aaron remains on military contract until 2021.

Aaron said: “We were both looking for employment upon return to civilian life but wanted to find a company where many of the military values that changed our lives for the better were replicated. We were recommended to Crosby and its recent commitment to our fallen brothers and sisters is further endorsement beyond what we already knew about our employer’s moral fiber. We’re proud to be associated with this dedication to a cause that is obviously close to our hearts.”

Erick said: “Not every company is prepared to support such worthy causes and we are both very honored to be employed by Crosby. They look after their staff and have afforded my brother and I great opportunities to progress within the company—from temp, to full-time, to being given extra responsibility. But when I heard about the Fallen Patriots initiative and was encouraged to help promote the campaign through this interview and other endeavors, I was filled with pride and excitement.”

For both, military service was a life-changing experience. Aaron had a family by the time he was in his mid-twenties but the army, by his own admission, gave him the maturity, discipline, and values that he now bases his personal and professional life upon. Erick, meanwhile, said he would also be forever indebted to military service and the experiences it gave him.

Aaron added: “We were fortunate that our comrades returned safely home to their families but that isn’t always the case and the impact it can have of those left behind is incalculable. PTSD [post-traumatic stress disorder]—the invisible injuries of service members—is another issue we are passionate about, and I know the Fallen Patriots organization is dedicated to serving the families affected by all such duty-related deaths, including suicides.”

Remember, to raise the profile of the campaign, Crosby has launched a photo contest whereby end users can submit an image of an application featuring a wire rope clip and potentially be named as one of two weekly winners. For more information visit riggingforthetroops.com.