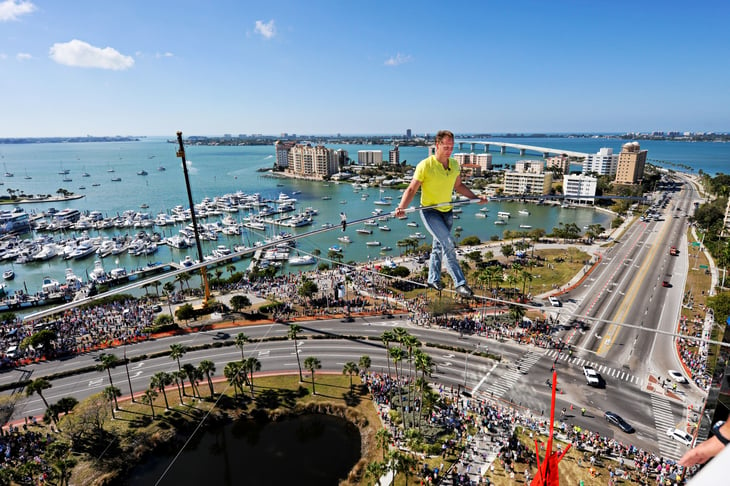 Ask Nik Wallenda about his life and profession and you can’t help but feel compelled to pursue your own passions. “My mom has always said it’s in our blood, and I truly believe that,” he explains. “You know, there was never a point where I didn’t want to do what I’m doing. It’s what I love. This is my passion. This is about a man living his dream, not about impressing people. If you’re doing what you love, you’ll never work a day in your life.” He exudes positivity and it’s absolutely contagious, as is his deeply anchored love of rigging. 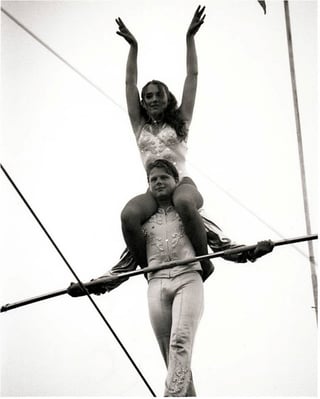 Tracing his roots back to the Austro-Hungarian empire of 1780, Nik Wallenda is the seventh generation of Great Wallendas, world-renowned high wire performers. The family moved from Europe to America in 1928, when Nik’s great-grandfather, the legendary Karl Wallenda, brought them here to join Ringling Brothers Circus: The Greatest Show on Earth. For Nik, high wire performance has truly been a lifelong calling. In fact, his mother, Delilah, was still walking the wire while six months pregnant with him. “Which means that I’ve been performing since even before I was born,” Nik playfully points out. Officially, his first circus performance was at the age of two. Toted out to the center of the ring in a pillowcase, he was presented to the crowd donning a full clown outfit and makeup. That same year, he also began walking on the wire, although he was not permitted to perform the stunt professionally until many years later. At age 13, in upstate New York, he made his high wire debut with a routine consisting of an incline walk without a balancing pole and riding a bicycle on the wire, at a height of around twenty feet. Just two years later, he began holding pyramids on the wire, a long-standing family tradition.

Ask anyone in the business of rigging, “Who has the longest standing tradition of making quality, innovative products?” and you’ll hear the name Crosby, time and time again. Being at the top of your field requires a continual dedication to improvement, a ceaseless yearning to do things better than they’ve ever been done before. Like Crosby, Nik Wallenda is recognized globally as a leading innovator in his field. He currently holds 10 World Records, although he has actually set 11, beating his own 2008 record for Highest Bicycle Tight Rope Crossing again in 2010. The list of record-breaking accomplishments under his belt is astonishing to say the least.

The Power of Rigging

“I have such a passion for rigging, I love that part of what I do. I enjoy the challenges that come along with it,” explains 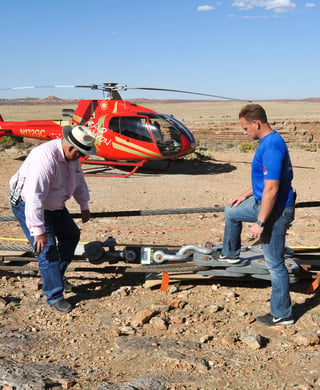 Nik, when asked what his favorite part of the job is. “People often don’t realize that I, along with my internal team, am hands on with designing the rigging for everything that I do.” For every single setup he uses, Nik designs it all with the help of his close-knit team: his father as his safety coordinator, his uncle as his head engineer, and his best friend as his head rigger. Nik began learning proper rigging techniques from the very beginning, with information passed down through seven generations of family. Relying on the proper use of rigging equipment to ensure their safety, the Wallendas are long-standing experts in the field. Nik’s personal enthusiasm for this aspect of his work has only grown stronger over the years.

“Even right now, I’m currently designing a new rigging with some brand new Crosby product. It’s so fun for me to figure out new ways of doing things, and safer ways. Through the generations, technology has advanced so much. My great-grandfather used to go to do the walk, and he would literally look at the wire and go, ‘Yeeeaah, that’s tight enough…’ But now we have tools and equipment, dynamometers to tell us to the ‘T’ how many pounds of tension are on the wire, and we have safety of 5 to 1 in everything that we use.” Nik pauses for just a moment, then adds, “My great-grandfather lost his life, truth be told, due to a rigging error. So we take that part extremely seriously. It’s the reason that my father and I always oversee every aspect of the rigging ourselves.”

It was during a high wire walk in San Juan, Puerto Rico in March of 1978, that Karl Wallenda, age 73, fell to his death due to bad rigging. Years later, on June 4, 2011, Nik and his mother successfully recreated and completed his performance. The 135-foot-long high wire walk took place between the two towers of the ten-story Condado Plaza Hotel, and served as a beautiful tribute to Karl’s legacy and lasting memory. “Recreating that walk with my mother was probably my favorite walk, because of the emotional connection. My greatest inspiration is my family, and what they’ve been able to overcome to do all this, generation after generation. But it’s actually really hard to pick a favorite walk, there’s something unique about each one that I’ve done that makes each one special.”

The Wallendas have relied heavily on Crosby’s quality rigging supplies since the very beginning. When asked what he looks for when selecting product for his carefully designed rigs, Nik is adamant:

“Crosby has always been the cream of the crop as far as rigging supplies. As a matter of fact, for generations, it’s 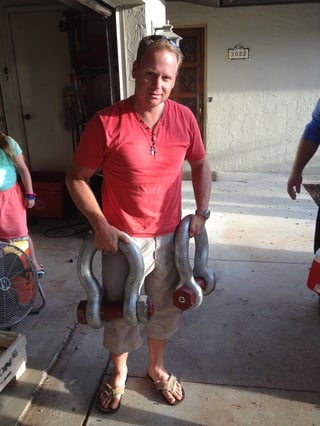 always been that if we’re going to order rigging it has to be Crosby - because of the quality and the safety factors that are built in. It’s the best, most reliable product on the market. It’s a brand that is recognized clearly worldwide. If you’re risking your life, you want the best, and that’s why we’ve always leaned on Crosby. I literally trust their products with my life.

“Crosby is the Mercedes of rigging. I truly believe their quality control department is a huge part of that. For example, I’ve seen product from other brands where the shackle pin won’t screw in because it isn’t threaded right, and with Crosby I’ve seen much more consistency of product. We will never use anything but a Crosby rope clip, we’ve seen so many of the competitors’ rope clips fail.

“When new equipment comes in, we look over every shackle in the order with a microscope and the consistency of Crosby products far outweighs any other brand on the market. They are THE brand in rigging, and I think really that’s recognized throughout the rigging world, they are the best of the best. There have been times where I’ve seen product where it seems like ‘oh, this is the same,’ but then when you really look at them side by side you realize that they just don’t compare. When you’re trusting a product with your life you just can’t justify cutting corners.”

With eleven World Records under his belt, and a lifetime of stunning performances across the globe, Nik Wallenda continues to astonish crowds worldwide with fresh concepts and a true devotion to his craft. Even after accomplishing so much, he remains humble and exudes a genuine gratitude for life that is both uplifting and tremendously motivating. So what exactly drives a man like Nik to keep moving forward after already achieving so much? His answer is simple:

“The opportunity to inspire other people. I receive letters from people every day and there’s a lot of fulfillment in knowing that people are touched and inspired by what I’m doing. It seems like a great big challenge at the beginning, when I look out at the Grand Canyon and think about walking across it on that wire. The analogy I like people to take home from what I do, anyone who’s facing a challenge, is that ‘anything is possible’. Whether you’re opening a business or battling an illness, anything is possible, against all odds you can make it too. Pursue what you love, no matter what it is.”

If you’ve been in the lifting, rigging, or material handling industries for a while, you know that it can be easy to get 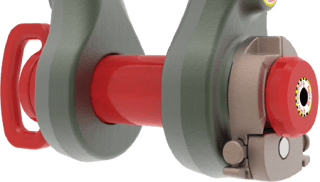 locked into a routine. Same types of equipment, same methods—the same tried and true approach applied for every lift. However, even the most familiar routines sometimes need to be shaken up to add a dose of vitality, innovation, and efficiency—to make a good routine even better…which is exactly what the Crosby Easy-Loc V2™ shackle bolt securement system is designed to accomplish.

The Crosby Easy-Loc V2™ reduces bolt install and release times by up to 90 percent. You read it correctly—90 percent. This is due to the fact that cotter pins, nuts, and additional tools are not required. The combination of reduced equipment and more efficient installation times saves valuable time on the job, as well as project budget spending.  In fact, the Crosby Easy-Loc V2™ is so efficient, it can even pay for itself over time.

As mentioned above, the Crosby Easy-Loc V2™ does not require any cotter pins, nuts, or additional tools which makes installation and removal fast and easy. In addition, the Crosby Easy-Loc V2™ is up to 60 percent lighter than a traditional nut and cotter pin securement systems, which makes one-hand installation achievable in most cases. In other words, it’s an ergonomic win.

Tough enough for any job site

When it comes to using the Crosby Easy-Loc V2™, it doesn’t get easier than this: open the collar, push the collar onto the bolt, then close the collar. That’s it—bolt securement done.

Follow the link below to shake up your routine and learn more about how the Crosby Easy-Loc V2™ bolt securement system can change the way you approach critical lifts. 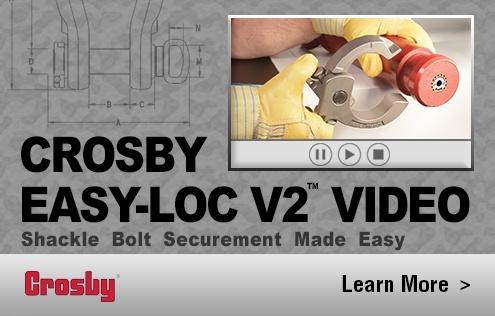